9 tips for presentations ‘in the round’ 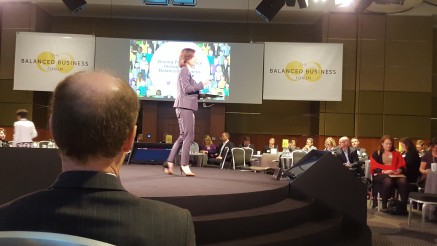 This week I supported our client, Pat Chapman-Pincher, to do her first big speech ‘in the round’. This is where the stage is round (surprisingly!) and in the centre of the room with tables and seating surrounding it. My colleague Ben, who used to be deputy editor at Yorkshire Insider, loves the format – he said he felt he could look everyone in the eye rather than shouting to the back of a room.

So the advantage is it creates real intimacy between speaker and audience. The challenge – it is an entirely new way of presenting. I chatted to most of the speakers and they were all clearly thrown and quite nervous!

However, the Balanced Business Forum was all about the new challenges for businesses and the new people and skills that will be needed, so it seemed fitting to give everyone a challenge like this – which is only possible because of technology!

James Wilkins, MD of Vista did the design and technical side of the event and was helpful in giving everyone tips. Here I share his and add my own.

Every stage will be different, but Vista created a 12’ diameter stage. There were four ‘corners’ to the stage, each with a comfort monitor – ie the prompt notes for a slide – and also the clock counter. So your eye is in sight of these, wherever you stand. 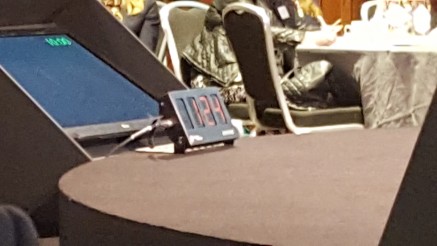 There were also large screens on each of the four walls behind the audience, and four cameras on each speaker. So even when you have your back to the audience, they can see your face on the screen. 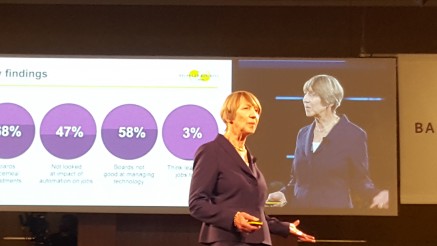 2.  Don’t worry about your back

I think all the speakers were worried about the issue of your back to the audience. 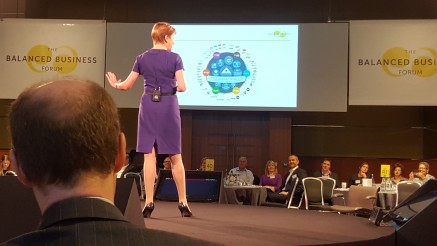 As a member of the audience, I can say it is not a problem. Provided you don’t stand stock still with a lectern (see below!) then it feels very natural for someone to be walking around on stage.

As I have said Ben prefers presenting in this way and argues that the audience gets a more personal experience as it makes it easier to interact and feels less formal than if you were stood at the head of a room behind a lectern.

James gave a great tip. You don’t want to go to a point, stop and then move again, but to keep gently moving.

He suggested you ‘walk towards’ the audience on the other side, talking to them in a conversational manner. Imagining you are strolling down a street, chatting to a colleague. So when you are on one side, turn a bit and then – looking at the audience across the other side of the stage – walk towards them. Pat quickly got the hang of this.

The one thing not to do is stand in the middle and then try and keep turning around to face new aspects. You and the audience will soon be dizzy!

You will mostly be walking. A good way to emphasise a point is to stop. That change of pace helps to focus on a key point. Then walk again.

7.  Hand gestures are even more important

It is always important to use your hands and as much energy as you can in presentations. But somehow I think this is more so in the round. Smile and use your hands, as you would when talking. 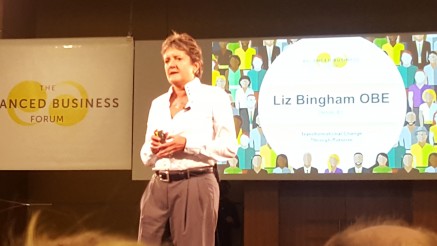 8.  Learn your speech and rehearse

I was with both Pat and Liz Bingham when they were rehearsing the evening before. Both had practised their speeches again and again and nearly knew theirs by heart. This meant they could start focusing on how they were presenting rather than the what.

Give yourself as much rehearsal time as possible. Several women were quite concerned that they might fall off the stage (if they were looking up and out at the audience and walking, would they see the edge of the stage?) – but less so having done it. Get rid of these fears when you are rehearsing so when you are on stage your entire focus is on engaging with the audience.

9.  Chuck away the lectern

Sir Nigel Knowles of DLA said he couldn’t do the walking bit so had a lectern. He is a great character, very engaging, but to be honest I missed a lot of his speech. I was fretting that he wasn’t turning around to a third of the audience – at all – while he spoke. He did turn his lectern at one stage but only 90° (which raised a big cheer so I know I wasn’t the only one worrying about this!).

If you are going on a round stage, you have to go for it. It is not hard. Bite the bullet and chuck away the lectern.

And if you want a truly inspiring speaker, do ask Pat Chapman-Pincher – she had the room laughing but mostly spellbound.   Her vision of the future is laid out in March of the Robots…into the Boardroom.

Finally – if you get a chance to go to next year’s Balanced Business Forum, you should go. Fantastic speakers, delegates and an inspiring event.