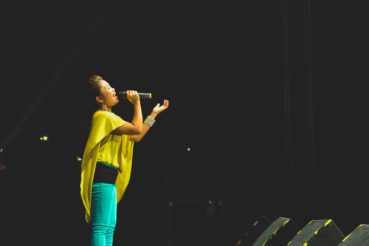 Jon Dean is a strategic change specialist and works with major organisations to help them implement new programmes, leadership development systems and major corporate transformations. In this guest blog for Northern Lights, he explores the corporate communication challenges of change…

These days the pace of change in organisations is non-stop. You only have to look at the NHS. Do a search on ‘NHS initiatives’ and you find ‘Realising the Value’ in 2014, Putting Patients First in 2015 and Sustainability and Transformation Plans in 2016.

And this constant drive for change and new initiatives is not uncommon in any organisation.

How do people react to all this change and what is the best way to communicate new plans and directions to employees?

I use an exercise to help managers get inside the heads of their employees going through a change programme.  I begin by getting people in the session to write down their feelings about change and the impact it has on them personally.

When they’ve done that, I then tell them they each have to write a song about these feelings and perform it in front of everyone.

Everyone’s initial reaction is to laugh, assuming I must be joking. They quickly realise it isn’t a joke and that amusement quickly turns to shock. This shock immobilises people – there is disbelief, denial and even fear at having to face such a task. 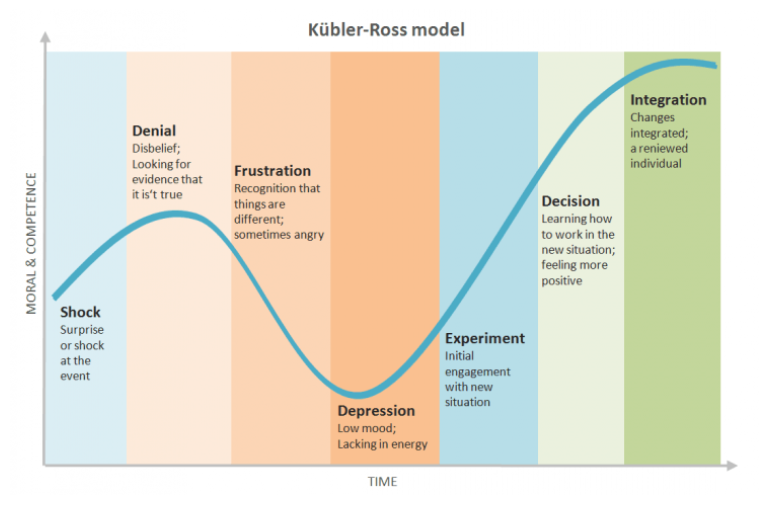 Anger and depression follows before they then start to accept the inevitable and, crucially, they start to plan for the challenge ahead and become more positive and focussed.

As the work begins, I then change my mind and tell them they will no longer be writing and performing the song – regardless of the energy they have put into it.

Again this sparks an emotional reaction. First there is disbelief which quickly turns into further feelings of betrayal and anger.

This process is called the Elizabeth Kubler-Ross Change Curve and is the recognised emotional process of any change in business.  The curve was initially developed to explain the grieving process after a bereavement, but the emotions are the same for anyone going through major change.

It is critical that leaders and managers recognise this process and understand how it will affect people within a business. Without it, it is impossible to effectively implement any successful change programme.

The biggest mistake most managers make when implementing a change programme is forgetting this change curve. In most instances, managers will have been made aware of change long before their employees.

What this means is they have already worked through most of the 7 emotional stages of change and they then fail to give their people time to do the same.

You cannot shortcut this process and managers must provide the time and guidance people need to get through it and adapt to the challenge ahead.

There is always a temptation to dress up change with a glossy vision that makes it sound exciting, and to preach to employees that the change will be good for them.  This is a mistake. You have to compromise and give people time to get to grips with the new strategy.

The key to this is to provide basic information in the beginning that people can absorb and understand. Give people simple timescales so they can plan while they adapt to change. Don’t try to push people through the change curve and, very importantly, give them permission to feel angry and afraid; these feelings are natural and do not make them disloyal or weak.

Once people have gone through this change curve, they too will be positive and receptive about the future. This is when you can start to engage staff with the corporate vision and encourage them to contribute to the process.

The priority should be to promote the need to change and not to try and oversell the benefits or make it exciting.

The five reasons for resisting change in business

There are five primary reasons why employees resist change in business and managers need to understand this to ensure they can deliver programmes successfully.

These reasons are all valid and it’s important to address the concerns and, critically, you must also deliver on the change programme. If you’ve failed to deliver in the past, staff will have felt let down and will have little faith that the latest programme is any different.

Communicating change in an organisation

Change is inevitable in business but it must still be handled carefully and communicated effectively.

In a lot of the organisations I’ve worked with I’ve seen both the good and the bad when it comes to communicating change. In most cases, businesses will want to deliver a glossy vision of the future but this often adds a layer of confusion.

In the corporate magazine there will be a carefully crafted and shaped message from the top, but often it will not reflect what is being said in meetings on the floor. If the messages don’t match, it will damage the change process.

The messages in any change programme should be simple and straightforward to deliver at every level of the organisation.

This mixed message completely undermined the process as staff saw it as an academic exercise rather than a practical process. 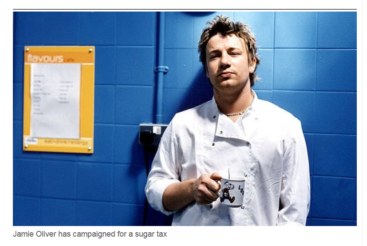 Another key issue is how you recognise and reward staff during the change process. A prime example of this is the TV campaign Jamie’s School Dinners. In the first series, Jamie and the TV cameras spent all their time with children who refused to eat vegetables. The result was that children quickly realised they would get all the attention and TV time if they made a fuss about not eating their greens. In the second season, this changed and they rewarded the children who were eating, or at least trying to eat, their greens and put the cameras on them instead.

The lesson is to be careful about giving the most attention to those making the most fuss about change and rebelling.  I heard a group of supervisors complain in one manufacturing business that the CEO kept congratulating and making a big deal of those who were fire fighting – giving up their weekends to sort out problems and so on.  No recognition was being given to those who just did a great job and delivered everything on time without problems. People quickly “learned” that the behaviour which top management really wanted was to leave everything to the last minute and fix it in a big panic!

Change is challenging and it would be great to hear your own examples of how to manage change. What are your tips for communicating the need for change to your employees?