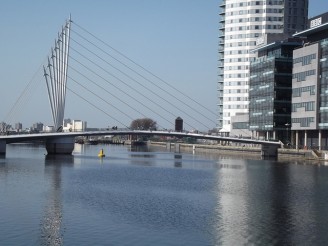 This weekend I was on the BBC1 Breakfast sofa with Charlie Stayt and Louise Minchin to talk about Sally Bercow on Twitter.

A few weeks ago I was trained for just this moment by The BBC Academy (this link goes to my blog explaining the initiative and tips from the training).

So how did it all work in practice?

I have trained my clients endlessly in how to take control of a subject in an interview – and completely failed to put it into practice.  One of our clients, the lovely Professor Keith Brown had exactly the same experience as I did.  The first time you kick yourself – but by the second or third interview, you get it to work.

I was asked to appear twice on Saturday – at 6.40am (yup, a 3.30am start to the day!) and 8.20am, both alongside media barrister, Christina Michalos.  The reality is that the presenters found Christina and her area of expertise a lot sexier than what I was going to say!  She deals with high profile people who are having problems on social media – getting fake accounts shut down and the rest.  They could relate to that and both presenters wanted to ask her lots of questions, on and off air.

When I was on the sofa, I was remembering things from my training

–          Be part of the discussion, don’t dominate (I hate this anyway, someone dominating a conversation on TV is really off-putting)

Charlie kicked off the debate with Christina and they had quite a discussion going.  I didn’t butt in, was being polite.  And when it came to my turn I answered the specific question I was given – I didn’t turn it around to what I wanted to say.  I can’t remember the question, but I remember talking and in my head thinking ‘I hate this, I don’t want to be saying any of this’.

I came out of that first session kicking myself.  I felt flat, I hadn’t said anything I had wanted to.   What was the point of my getting up at crack of dawn?

When I was sitting in the Green Room – we had an hour and a half to kill – I went on Twitter to say how hopeless I’d been and empathise with our clients.  And was amazed to see tweets and emails to me.  One was from my older brother who said “Well done but I hope at 8.20 the barrister lets you do more talking.  You look lovely.”  Aren’t brothers great?!

That confirmed my own view that I had to be more assertive – trust your instincts – and spurred me on.  I had to get it right next time.

I also saw a tweet from @neilbrenson – a B2B communications specialist whom I don’t know at all.

The fact that he bothered to find out who I was on Twitter and tweet gave me such a boost.  Maybe I wasn’t talking nonsense, at least, and what I had to say was worth getting right (thanks Neil, you have no idea how much of a boost this was!)

When media interview training clients, we recommend jotting down three key points on the back of a business card and visualising these for the interview.  Keep the points simple.

Never mind three points.  On Saturday I learnt just to have the key message you want and get that in, the rest will flow.

I have been saying for some time now that I think we have a real problem in the UK.  Very few chief executives and management teams understand or manage social media in their organisations.  That was what I pitched as my ‘issue’ to be accepted for BBC training and is what is relevant to our business.

This was the point I had to get in.

I can’t remember now quite how the second interview started – but again Charlie, bless him, went to Christina.  This time I was prepared.  Very quickly, I came in and said ‘but the point about this is that Sally Bercow has done us a great disservice.  She will just reinforce to UK bosses that Twitter is unpleasant, irrelevant and very risky’ (or something like that).  And I was off!  This is an issue I have thought through, know is a serious problem for our country, feel passionate about and know we can help on.  I was therefore confident and could make the points I wanted.

What interested me was that as I fired off, Louise (who I was mainly looking at) was really interested and I felt her body language was sort of saying ‘oh good, that’s a new angle’.

Presenters are given an outline brief for each story and a few questions to get going – but they aren’t the experts, you are.  They are more than happy to go with a good angle if you give it to them – so take control of the question and the answer.

I had so many texts from mates and others saying ‘you look fab/glam’ – so the make-up team really do work magic.  Thanks to them!

And business people are dying to hear their peers talking sense in the media.  I didn’t expect anyone to be up on a bank holiday Saturday, let alone bothering to engage and respond.  But we have had dozens of fab tweets, emails and texts – lots from people we don’t know.  Hits to our website were way up, as were downloads of our ebooks.  (I found myself naturally mentioning the ebook we have written for students – I had had no plans to name-check it, but it followed on from a point I was making. My husband wondered if it was a bit ‘salesy’, but honest gov it was entirely unintentional!)

Look at some of these comments – for which thanks to all those who gave lovely feedback.  And not a troll in sight! 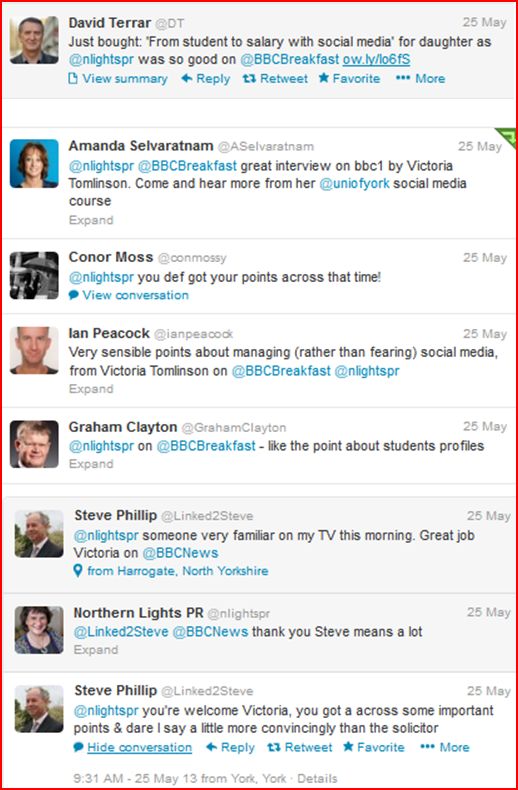 And what did my brother reckon?  The next text came whizzing through ‘That was better and extremely informative.  Glad you were given more time and well done for jumping in to take control!’

Thanks Ian and to all the other supporters!  You were a big part of my lesson in how to give a good (or a least better) media interview.