How to get the most from the people you work with 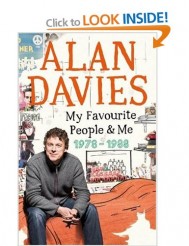 I hear the actor and comedian, Alan Davies, has a new book out My Favourite People and Me.

It made me think about the people who have taught me the most in business, particularly on how to get more from the people I work with.

Lesley Parrott, a headmaster who chaired NACC, a national charity committee that I sat on, taught me how to get the most from a charity committee. We were all volunteers and met every few months in London – coming from Hastings to St Albans. He achieved a phenomenal 90%+ attendance rate.

How did he motivate and manage us all?

Malcolm Cuthbertson, was my boss at the banknote printers, Bradbury Wilkinson – now bought up by De la Rue.

Malcolm had been a major in the army and brought fantastic people skills to the dire days of British manufacturing and was inspirational in how to get the best from your colleagues:

– Thank and praise people, especially those who never get noticed. I’ll never forget a checker on our passport line who spotted a spelling mistake. It wasn’t her job to check the content of the passport at that stage – she was just checking the overall print quality of the final passport. Malcolm sent a huge bunch of flowers to her on the shopfloor to thank her for going beyond her role

– Be considerate of people doing more routine jobs. One appraisal with Malcolm is etched on my brain. He told me in no uncertain terms that I needed to start learning to ‘suffer fools gladly’. He pointed out that there was no way I would want to do the rather dull jobs that many people do and instead of being impatient and irritated if they were slow, I needed to recognise the huge role they played in the success of my job – and to thank them for what they did

– Anticipating needs. Our director had been on holiday. Malcolm put together a full briefing for his return – a file with little tabs down the side so the director could see what had happened on each order, where the critical issues were and see relevant copies of correspondence if he wanted detail. Very Army and very organised!

– Humility and honesty. Malcolm was the first person I ever came across who admitted at work that he hadn’t understood something and asked someone to explain it again. So far from diminishing his status, he was respected by shopfloor and managers alike.

Thanks Lesley (sadly no longer with us) and Malcolm for your wisdom and friendship.