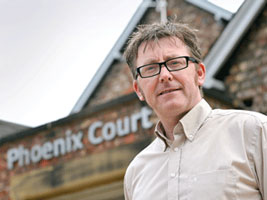 York St John University has appointed Darrell Hooper as the first business and innovation manager at the Phoenix Centre where he will support and mentor seven new businesses.

The new post was created as the university takes over the running of the business incubator from Science City York and sees the centre established as a hub for innovative creative and digital start up companies.

The Phoenix Centre, launched in 2009, was originally planned as a two year project to support new businesses with growth potential.  Due to its success in supporting start up businesses – some run by recent graduates – the incubator will continue with the university as lead.

“The businesses here all have the capacity to grow and to be sustainable” says Darrell, who was previously new enterprise advisor for Business Link in the Ryedale and Scarborough area.  “Over the next year I will be helping them to plan their next steps and how to address any barriers to their success.

“The centre is a great way to bring the university and businesses together and it supports York St John’s own enterprise projects such as its DesignWorks unit.  I believe that more graduates will look at starting their own business.  There is a massive opportunity to raise the entrepreneurial aspirations of students and also to help increase their employability skills.  We want students to see the centre as a place where they can come in, work alongside businesses – perhaps on internships or doing some research.”

“Being in the Phoenix Centre gives us a professional base where we can invite businesses,” says Kevin Curran, who with Chris James runs social enterprise Inspired Youth. “Also it is important to us to be surrounded by other creative businesses and to have the support of the university.”

Inspired Youth works with young people to create hard hitting campaigns and projects on health and social issues such as homelessness, alcohol and drug abuse and teenage pregnancies.   Their award winning project – The Young Carers Revolution –  was discussed in Parliament and resulted in one York carer being invited to Downing Street to discuss the plight of young carers with the Prime Minister.

The five York St John University graduates behind film production company Orillo hope that being part of the Phoenix Centre will help them to grow their business.

“We knew companies who were based here last year and we were always popping in and out so saw at first hand that the business support here was first rate,” says Rich O’Hare.  “This is a chance for us to bump the business up to the next level.  Prior to coming to the centre we were all working from home which was a logistical nightmare.”

Award-winning Pilot Theatre was one of the businesses based at the incubator two years ago.  Artistic director Marcus Romer, says: “Pilot Theatre had a very creative and fruitful partnership with the Phoenix Centre. We were able to network and develop our links with Science City York and York St John University.

“As a result of our location at the Phoenix Centre we have been able to develop new work and create new opportunities in the city and wider region.”

The Phoenix Centre is holding an open event on Wednesday 19 October from 6pm – 8pm when York businesses, York St John students and local people are invited to come along and meet Darrell and the eight start ups.  For more information go to http://w3.yorksj.ac.uk/phoenix