Princess codes a robot, championing girls to get involved in technology 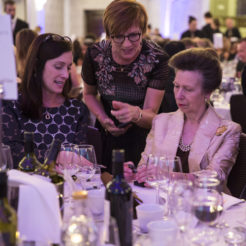 HRH The Princess Royal, Royal Patron of WISE, was part of a winning team to programme an all-conquering robot at the WISE Awards dinner celebrating the achievements of women in science, technology and engineering at the Grand Connaught Rooms, London last week.

The Princess Royal coded a micro:bit to play ‘rock, paper, scissors’ which was then played as a knock-out game involving all 500 guests.  Fellow table guest Myrtle Dawes, director at Centrica was the outright winner.  Teaching Her Royal Highness were Cindy Rose, UK chief executive of Microsoft, and Dr Nina Skorupska CBE, chief executive of the Renewable Energy Association and WISE board member.

Helen Wollaston, chief executive of WISE, said: “The micro:bit is being rolled out to primary schools across the UK to teach children to code.  The Princess Royal was an inspiration, getting involved with creating the code for the micro:bit and playing the game.  We asked all our guests to go back to the classroom and show girls how easy technology is – and fun!  The Princess Royal has shown the way.

“The UK loses 50,000 talented girls every year from science, technology and engineering jobs. Girls outperform boys in GCSE science subjects, with near equality in numbers taking these exams.  This plummets to just 33 per cent of females after GCSEs and by university, just seven per cent of women take degrees in technology and engineering.  We must inspire women both to help the UK’s skills crisis and for women to get great jobs.”

Micro:bit is an educational foundation set up by the BBC with ARM, Microsoft, Nominet, Samsung and the Institution of Engineering and Technology (IET).  It is distributing one million micro:bits to school children in the UK.