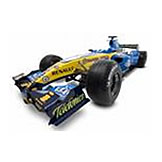 Like many, I am really shocked at the news today that Renault is only to get a two-year suspended ban from Formula 1 for their role in fixing last year’s Singapore Grand Prix.

All sorts of issues flashed through my mind as I listened to the radio. Nelson Piquet could have been killed by purposely crashing his car – would that have been murder? This is a terrible example for children. It is no good complaining about falling standards and bad behaviour of young people if those with regulatory powers set such low standards for themselves.

As a communicator, I also wonder how this will affect both the Formula 1 industry and most of all, Renault’s own business.
Andrew Benson – a BBC correspondent – writes in his blog that ‘one has to question the culture of a team in which this sort of shocking event could be considered’.

I would completely agree. Although Renault has sacked the directors who knew about the plan, they will need to do a root and branch review of the whole business. Almost certainly Renault has allowed a macho culture to develop, where winning is more important than people’s lives or the ethics of sticking to the rules.

Renault must be breathing a huge sigh of relief at their sentence. Let’s hope they recognise the second chance they have been given.