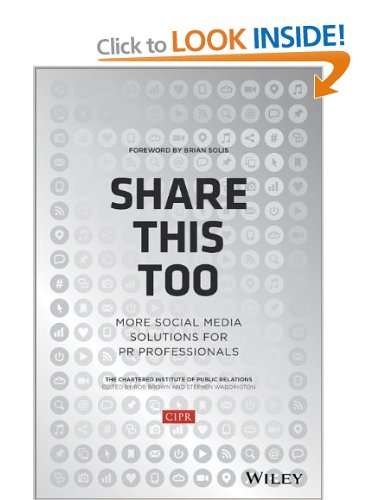 The CIPR, the PR’s professional body, has done itself proud.  A new book, Share this Too, which came out last month, puts the world of social media into a strategic, PR context.

I have long since argued that the PR industry should be the ‘go to’ people for social media but we have been playing catch up.  Two years ago, I wrote this blog, How did the PR industry lose the social media battle? And challenged the CIPR to get PR people technical in social media.  This new book gives a lot of reassurances. Maybe now we can turn things around.

Share This Too has been written by 30 contributors from communications and public relations fields and covers both the thinking and some best practice of being social in communications.

We are delighted that our own ebook for students on how to use social media to get a job, From Student to Salary has been referenced in Richard Bailey’s chapter Building a Personal Brand. 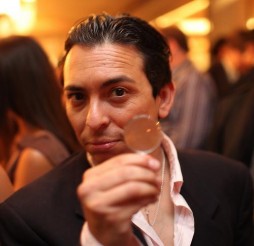 Brian Solis – one of my own heroes and influencers – says in his foreword:  “What is happening now is both revolutionary and evolutionary.  It is time to rethink the value proposition of marketing and communications and your role within it’.”

Here are my takeaways from the first 7 chapters – part two will share the rest.

Rob Brown picks up the point about PR in rapid evolution – and presenting opportunities as well as challenges “Public relations practitioners are uniquely placed to take advantage of a world where conversation and dialogue have largely supplanted top-down, one-way messaging.  Our skills are firmly rooted in debate, discussion and the art of persuasion.”

He also makes the point about the technical skills of PR people “I’ve encountered PR people who visibly freeze when the subject of analytics is raised – and yet we’ve always used analytics”.   Rob is right – PR people can and must do maths and write!

Dom Burch’s chapter is content, context and avoiding cheap talk.  He says “… some brands have placed too much emphasis on reaching scale quickly at all costs, without due care and attention towards the quality of the connections being established.”

Just last month, I did a social media masterclass with Jonny Ross for the Yorkshire Mafia and we ended up disagreeing on which LinkedIn invitations to accept – Jonny is a LinkedIn tart, I go for quality.  It’s not quite what Dom is talking about but the principle is the same – don’t focus on numbers but the quality of engagement.

I liked Robin Wilson’s focus on being strategic, understanding your customers and audiences and thinking about the responses you want and how you will measure this.  All through the book, there were references to content curation and Robin’s take is ‘the most successful content frameworks tend to have more created content than both commissioned and curated”.

Ged covers a wide range around audiences and looks at influencers.  He says “Finding influencers for a PR campaign used to be relatively easy; there were a number of database services that listed out publications and their editorial teams.”  Actually, I am not sure I would quite agree with his take on ‘influencers’, but I guess he is talking about ‘media influencers’.  Now he suggests the measure of influence is through social media, looking at popularity (number of followers), propagation (how much content is shared) and mentions (being mentioned by others). 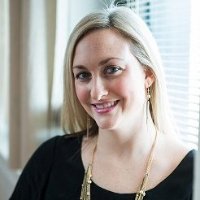 Kate Matlock is a digital anthropologist and looks at behaviours online, particularly attention spans.  She makes a valid point about using hashtags and tweeting in conferences – are we really communicating?  “Having a connected device spreads our attention.  Many social media types would like to think they can listen, tweet, like, RT, reply to an email, look up and clap on cue and still walk away from an event having gotten what they paid for with that one golden nugget of awesome.”

Well, it is hard work – but yes?!!  These are the tweets I did at the Women’s Business Forum – but I reckon it helps capture the day?

Adam Parker picks up the challenge about measuring influence – including my own bête noir, Klout.  I have long hated and yet been obsessed with Klout.  He compares Klout, Kred and Peerindex, showing how to understand the algorithms behind them – and then influence the scores.

A much needed chapter on the ‘unsocial’ side of social media from Dr Mark Pack.  He looks at staying out of trouble “Unless you deliberately wish to be edgy and court controversy … simply avoid saying things online which you would not want either a job interviewer to have read just before you walk into a room or your mother to see just before you turn up for Christmas.”  Sound advice.

I want to capture the nuggets from all the contributors – so there will have to be a part 2 to this blog.

Clearly this book is much needed and it’s excellent to have been led by the CIPR.  Congratulations to all.  I was recently surprised – and delighted – at the responses I got when on Breakfast TV talking about Sally Bercow and Twitter (this was as the BBC’s expert woman on social media and business).  There was a real feeling that the business world wants to hear common sense talked about social media, not constant celebrity chatter.

Am I raving about it all?  Not quite – but these are opportunities for the future.  It was disappointing that the focus of the book is on major brands.  There are few case studies and Asda has two of those and Red Bull is mentioned by three contributors.  And I cannot find a single case study or even mentions about B2B social media, which is the biggest growth opportunity for PR professionals, particularly with business blogs.

But any author will always want to include more – and this will lead on nicely for the next book!  Should the next book be dedicated just to B2B social media – there are now enough case studies and expertise to warrant this?