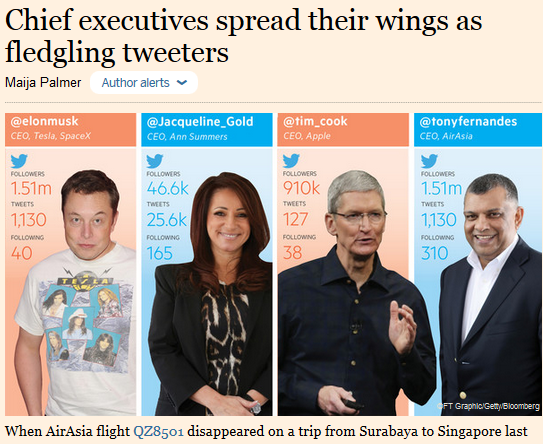 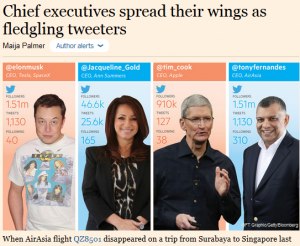 The FT’s Maija Palmer recently looked at chief executives who are on Twitter. The article quoted Linda Bolg of Socialbro who said ‘I would personally always advise (the CEO) being on Twitter as it can raise the company profile’.

It was great to see social media being covered from a strategic perspective rather than as a vanity or entertainment tool. But I found myself writing a letter to the FT to say that I believe only good communicators should be on corporate Twitter – and not all CEOs are?

For me, the questions are – does everyone have the skills (never mind the desire) to use social media well – and should they? 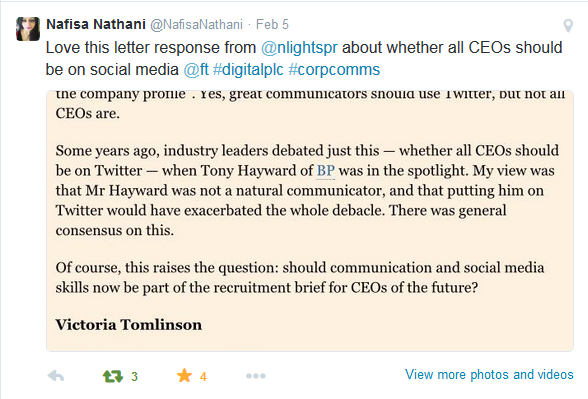 I recently worked with a financial institution to help directors and senior managers use LinkedIn to win business. When I was briefed I was told that most of these 30 leaders were on, and encouraged to be on, Twitter – each with their own profile. I confess my eyebrows shot up. On the one hand the word ‘awesome’ went through my mind that such a traditional business could embrace social media to such an extent. But at the same time I was thinking ‘good grief’ because I wouldn’t see financial experts as the most natural candidates for social media.

So who should be on Twitter; should all chief executives be on Twitter; and should recruiters now be adding new skills to the candidate brief for a CEO?

We haven’t found a definitive list as to who should be on Twitter, but discussing it with our team (who are all on Twitter), this was our list of the characteristics of a good corporate tweeter

The qualities listed above are those of a good communicator? And we have plenty of evidence that chief execs are not necessarily good at communicating. I mentioned Tony Hayward of BP in the letter, who many would say made a bad situation worse by not understanding public viewpoints.

Bob Diamond of Barclays and many other bankers did not seem in touch with public sentiment. I believe that any of these would have been a disaster on Twitter.

However, if you get a good communicator at the top, Twitter is a powerful tool. The FT article cited examples of @jacqueline_gold @tim­_cook @tonyfernandes and @elonmusk as CEO tweeters with something to say. The Guardian also lists a number of chief execs of charities who are good tweeters.

Our view is that with the right person at the Twitter helm, this social media can add corporate value. A survey by Weber Shandwick found that 76% of global executives want their CEOs to be social on both internal and external platforms. 52% of employees said they felt more inspired by their social CEO.

Have a look at Useful Social Media which looks at the social CEO in more detail.

This may sound far-fetched, but some organisations already require their senior management team to be adept at social media. And it might surprise you who is expecting this.

We did some research into social media for housing associations a few years ago and talked to a number of leaders in this sector.

Helena Moore, director of organisational development and communications at housing association, Bromford Group, said: “One of the biggest challenges initially was getting senior managers to ‘get it’ especially when you are still learning yourself. Now our CEO is suggesting for some colleagues that we should be building this into their job profiles – not using social media won’t be an option.”

This date of this interview was 2012. How long before it will be a requirement for all senior management to have social skills?

So, should all chief executives be on Twitter and have we identified the right skills for when social media becomes a job requirement?