Should children be put into the PR limelight? 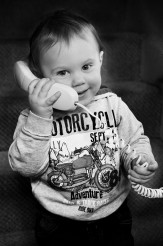 Mary Portas this morning gives her usual forthright views on brand David Cameron in the Telegraph.

In the midst of this she puts her view that Cameron should keep his children out of the public eye.

“As far as his general image goes, it’s also time Cameron stopped banging on about his family and the “I feel your pain, we’re all in this together” routine, as though he were one of us, which he isn’t. …… As for his children, my instinct is that he would do well to emulate Gordon Brown’s approach and keep them out of the limelight.”

This is a thorny issue for anyone who wants a media profile – whether you are Royal Family, the Beckhams or a business person.

Over the years we have acted for a number of high profile business people who have suggested doing interviews at home with their family.  They think it makes them seem approachable, showing the balanced human being and they cannot see the harm.

Our advice is always no.  Do not put your family into the media spotlight.  If you proactively use them for your own purposes and ‘offer’ them to the media – the media will rightly say it is now fair game to cover your children in their own right, whatever the circumstances, whether in a gutter drunk at the age of 16 or tottering on high heels at the age of three.

Against this, if a parent goes to considerable lengths to keep the lives of their children private, the media see this as an unwritten contract to stay away from the children – at least until they are 18.

Most people respect the Browns for putting their children first.  Do a Google search for family photos of Gordon Brown and you find plenty with Sarah, but nothing with their children.  Even their Christmas card merely has a photo of the front door of 10 Downing Street – not a family member in sight!

If you search for photos of the Blair family, dozens of posed photos come up: on the front door of number 10, on holiday, in front of airplanes.

For some time now, I’ve been concerned about the BBC journalist, Justin Webb, who has talked openly about his son’s diabetes. Sam was just eight years old when diagnosed and has since taken part in a number of broadcasts, covering how he injects himself and discussing what the illness means.

I’m sure Justin has done this for the best of reasons, probably to raise awareness of diabetes and increase research for a cure. As a parent he must be frustrated that he can do very little to help his son and will see this as a small way of improving Sam’s chances of better health in the long term.

At eight years old Sam is probably excited at being on the radio and it makes his illness seem more interesting than dreadful.

But how will he feel when he hits puberty, having his illness so publicly added to all the awkwardness of growing up?  He is in danger of becoming ‘Sam, the boy with diabetes’ and letting this become his label for the future, rather than being about Sam, the boy with ambitions and achievements.  To say nothing of growing up and going for job interviews.

Sam may be very happy with all this – but the point is he is not really being given a choice.  While I am sure his father asked him how he felt before doing an interview, Sam can have no concept of how this may come back to haunt him in future years.

Every parent wants to protect their child.  And if you are in the spotlight yourself, the best protection for your child is purposely to keep them out of the media, no matter how innocent or tempting it may seem.