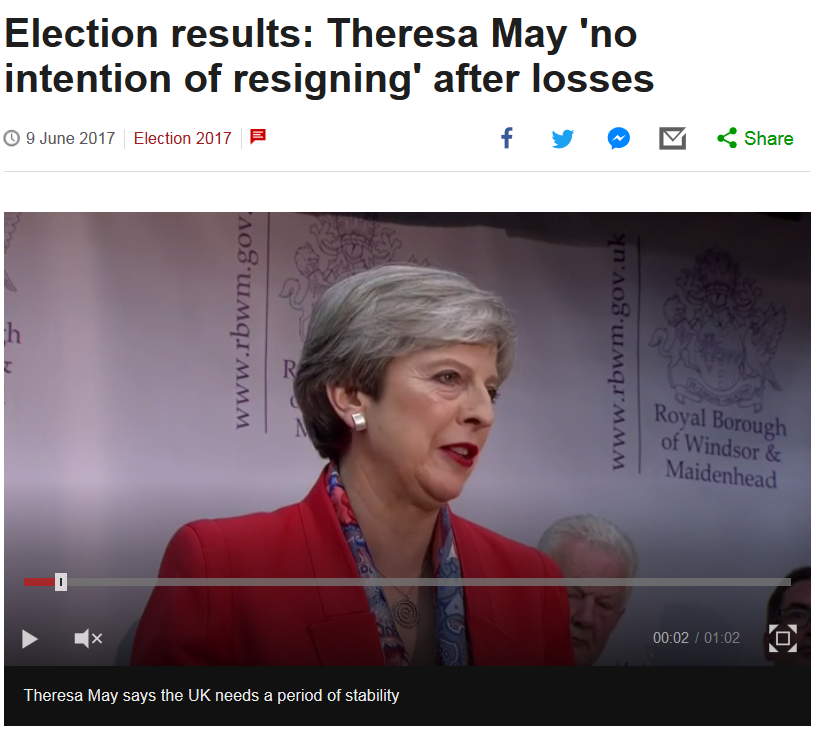 The 2017 UK election was a disaster for the Conservatives – even Theresa May would admit that. But in doing so, she gave a masterclass in leadership pitfalls.  What were the biggest issues and what can others learn from her leadership style?

Rupert Myers of the Telegraph says the failed election gambit was because Theresa May was ‘unavailable, aloof and refused to give interviews’ – and took the electorate for granted. Put another way, poor communication was at the heart of the problems, but it is more complex than Myers outlines.

‘Strong and stable’ was laughable.  Theresa May and her colleagues spouted these words in every speech, over and over again – and all we did was either groan or ridicule. They engaged no-one. The words meant nothing.

In communications terms, she was ‘talking at’ rather than ‘pulling in’.  And it’s a mistake that you hear business leaders make every morning on radio and TV.  They are primed – poorly – to get ‘their message’ over. But you don’t get a message over by constantly repeating ‘key phrases’.

A member of the audience in the BBC’s Question Time, said he bet his wife £10 that the phrases ‘strong and stable’ and ‘coalition of chaos’ would both be used by the Conservative minister in his first answer to a question – no matter what the question.  Of course, he won the bet.

Theresa May relied on two close advisers, Nick Timothy and Fiona Hill, to be her ‘listening ears’ and manage access to her. Quite rightly these two have now been sacked.

You often see this in business – a leader shut away on the top floor where you need a security code to enter their offices and only one or two directors have real access to the chief executive. Doom will almost certainly follow.

Why? Because the CEO isn’t in touch with enough people in their business to hear first-hand about employee morale, customer problems, hear the good ideas.  Not many will go to the extremes of our former client, Stephen Martin (now head of the IOD) when he took part in Undercover Boss for Channel 4 to hear first hand what employees were saying, but every boss needs to be in touch with their grass roots.  Blocking access to a leader does not achieve this.

Following on from this, if you are only testing out your ideas on a small inner circle you are not getting a breadth of views and experience to shape them. Theresa May did not consult on the Conservative’s social care plans – and was then caught out by public reaction and had to do a U-turn.

No one person can fully understand the impact of change on all employees or customers – the more people who are consulted and involved in changes, the better understanding and shaping of policy and how to communicate the change so it resonates.

4. Create a vision and purpose

The election completely lacked any kind of vision for the future that people can buy into.  Sure, Brexit has to be negotiated – but where was the Industrial Strategy and the Britain of the Future, where was our exporting plan, how are we going to capitalise on the UK’s tech and innovation expertise?

Employees and the electorate are very similar – we all want to know what are we doing, how are we going to get there, does work have a purpose and do I believe in it?  Employee engagement is very similar to electorate engagement – we are all humans who want to be inspired, but realistically.

5. Leaders have to be seen and seen to lead

One of the most shocking aspects of the election campaign was Theresa May’s refusal to take part in debates or turn up at key events. It came over as childish or arrogant.

Visibility is key to good leadership. Employees want to know who their leaders are and to know them. Never underestimate the power of a leader being out and about, prepared to debate and to be accountable.

I actually like Theresa May and think, like many, she is the first prime minister in years who puts country and duty first, rather than building contacts and profile for when she leaves the job.  I have been irritated that the media keep searching for her ‘brand’ and juicy past – when her brand and her past are about doing her best.

There is nothing wrong with this – and many find it refreshing – but she hasn’t yet found a way to engage through the media.  The way for her to do this will be through storytelling.

Theresa May needs to find a way to tell real stories that make a point and don’t sound boastful (which is not her style).  When a leader tells real stories, their body language relaxes, their voice drops  and they become authentic and more animated.Because the story means something to them.  There is no doubt May is wooden in front of a camera. Storytelling would transform her media face and presentation style.

So those are the gifts that Theresa May has given every leader.  Were there other critical ones that I have missed? Do you also think communications lost the election – or was it more than that?