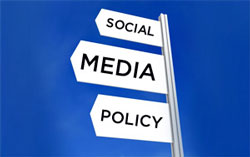 –          Recruitment – what do most businesses do re looking at Facebook when deciding on candidates?

–          LinkedIn – should they make everyone stick to a standard Summary?  And how personal should they let people be?

–          And where do you draw the line between private and personal life of employees – can you protect your business from an employee criticising a major customer on Facebook?

In doing this, I researched examples of what other employers are doing – a lot of this is not at all clear cut.  Here are the good and the bad of what I found – except there isn’t much good in these.  Sorry to the companies – their examples are now the stuff of case studies across the world.

But that’s the risk to you and your employees if you don’t anticipate the threats in social media.

After a blogger criticised a flaw in the airline’s online booking process, staff from the airline left several childish and insulting comments in response to the post. To make matters worse, after the episode was publicised around the web, the company issued a statement saying that ‘it is Ryanair policy not to waste time and energy in corresponding with idiot bloggers and Ryanair can confirm that it won’t be happening again.’

Two employees created an extremely unpleasant video showing what they did to the food when preparing pizzas – cheese bits up their nose will give you an idea.  Despite the video being banned and removed, other versions have gone up – the link above has already had 60,000 hits.  Although President Patrick Doyle made a video to apologise – this has only had 100+ hits so hardly effective.

A Hays employee left the company and set up on his own, approaching all his contacts that he had on LinkedIn.

Hays took him to court and he was ordered to hand over his contacts to his former employer.

Have to say we would have said these contacts were personal to the individual – and all the more reason why organisations need to set out their stall in their policies.  And avoid costly court cases.

Of all organisations, you would expect MI5 to have anticipated the security issues of social media – but even they failed to get this right.

This case highlighted the tension between what an employee can say is their private life and what impacts on their job.

The new head of MI5 was exposed for a major breach of security.  It was not he, but his wife who put details of their holiday on Facebook, without any privacy settings.

I found a Facebook group called ‘You’re Fired’ for employees who have been sacked for what they wrote on Facebook.

Of course you only see half (if that) of the employer’s story – but that does not matter.  People who have been sacked are understandably bitter – and social media is a great way to vent that anger and team up with others in similar circumstances.

Is it OK to look at candidates’ Facebook and LinkedIn pages when recruiting?  A survey released by Viadeo said that 62% of British employers now check the Facebook, My Space or Bebo pages of some applicants and that a quarter had rejected candidates as a result.  Reasons given….included concerns about excess alcohol abuse, ethics and job ‘disrespect’.”

This could potentially be regarded as a misuse of personal data, contravening the Data Protection Act 1998.

Again, you need clear guidelines to anyone who is recruiting in your organization as to what is and is not acceptable.

Have you seen other horrors to share and help us all anticipate what could happen next?