What next for Theresa May – and Luke Johnson … and you? 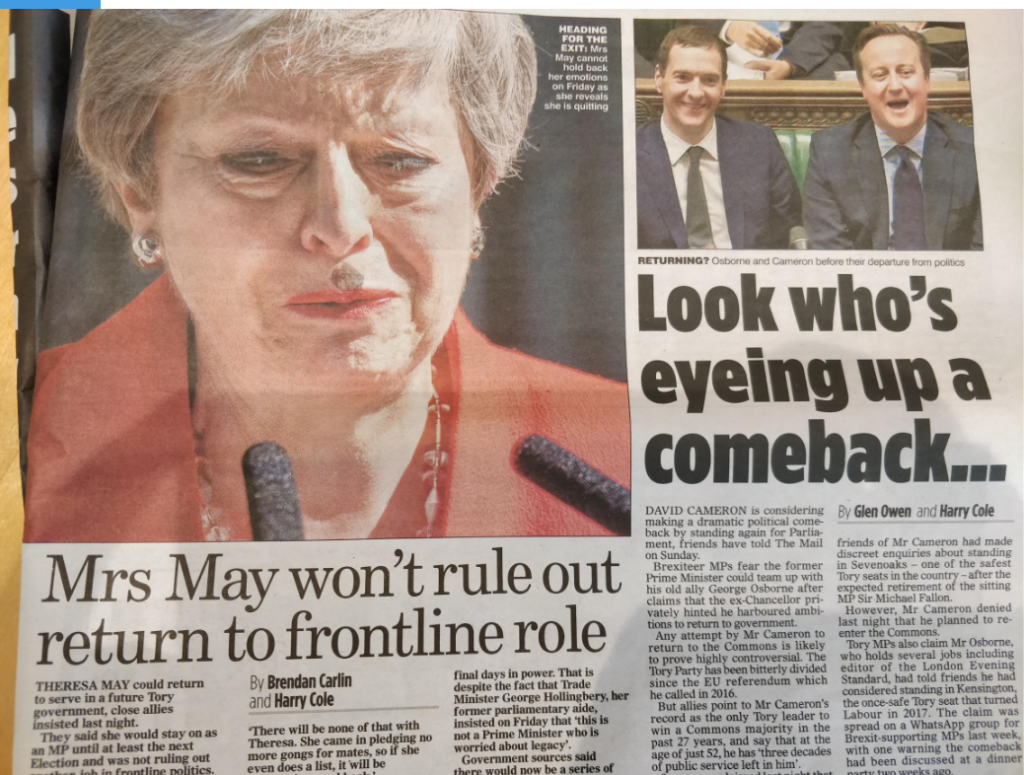 A few weeks ago I saw this cutting in a Sunday paper and was shocked.  Theresa May’s allies think she ‘could return to serve in a future Tory government’ and Cameron is ‘eyeing up a comeback’.

It got me thinking about people coming to the end of their careers and looking at their next options.While mulling this, I also read Luke Johnson’s comeback article in the Sunday Times following the failure of Patisserie Valerie.

While Theresa May and Luke Johnson are at the extreme end of having a spectacular and very public fall after successful careers, there are lessons that can be drawn for anyone looking at what next after a long career.

You need to look at how you see yourself, get objective views as to how realistic this is, and then have a plan to manage perceptions about you – whether good or bad. The reality is that there are markets for anyone with a lifetime of experience and skills – it is just finding the niche for them and making sure the timing is right.

Here I look at both May and Johnson in more detail and what can be learned – largely based on 30+ years in PR and communications with a good slug of crisis comms management for companies and individuals. In that time, I’ve inevitably developed a strong sense of what feels right to the public and how to manage your reputation.

In the case of Luke Johnson, he seems to want to rebuild his career as an entrepreneur, helping companies grow quickly and be profitable – there were lots of reminders in the article about how well he had done all this in the past.

If he wants to find future roles in the private equity market – rather than listed companies – there is a reasonable chance of doing this. In private equity, the focus is on driving profit and achieving a good exit.  The judgement for investors will be to decide whether he was a fool and could miss the mark again or whether it was all a fraud that ‘no-one could have spotted’. In terms of his media activities, the Sunday Times clearly sees him as an interesting character and will keep going with his contract.  You only have to see the pages and pages of comments that his column generated to guess that the Sunday Times thought he would be controversial and that is good for business.

So his reputation is tarnished, but he probably can ride the storm in the markets he operates in.

Theresa May is a different case altogether. If she plans to serve in a future Tory government, then she needs to be seen as credible with government colleagues and above all, the public. I just think this is a stretch too far. You hear people say time and again that she had an impossible task and has been dutiful in trying to deliver what the country wanted.  But if you watch Panorama – Britain’s Brexit Crisis it is a neat summary of how Theresa May had poor antennae as to what the EU and her colleagues were doing and would do; really poor collaboration and negotiation skills; and above all, almost no ability to bring people along with her or influence anyone.

I can’t see that any government or the public would ever say, “We must have Theresa May because she will solve x problem” in terms of a front-line government role.

Years ago, I had a really interesting conversation with someone very senior who had been heavily criticised in the media. They had been going to write a book about the process and eventually decided the memories were too hard and just to move on. But they had some very interesting comments about recovering from something like this.

Previously having an alcohol problem, they were an AA member and said they thought that recovery from a public downfall is very much like recovering from alcohol addiction.  They cited AA’s 12 Step Recovery Programme and a couple of points really stuck in my mind. To recover, you have to (in my own words)

Luke Johnson’s article provoked dozens and dozens of comments – more criticising him than supporting.  The big issue was as much the article itself in which he neither seemed to accept any responsibility nor apologise to those who suffered.

Despite being executive chairman, in the article he said, “I have always felt that if you are part-time chairman then you mustn’t interfere excessively with the day-to-day running of a business ……” He then cites Grant Thornton, the auditors as “comprehensively having the wool pulled over their eyes” and talks about his loss of self-belief and sense of betrayal.  Only towards the end of the article does he fleetingly mention the losses of his employees, suppliers and investors or the impact on his family.  And he concludes that “as long as these failures are honest, then the entrepreneurs should not be shunned”.

Here are a few snapshots of the comments

“No sign of any apology. Just a ‘Poor little me’ routine when the fact is that HE (not the auditors) is the one with the legal obligation to ensure that the accounts and governance of the company are correct. Stop trying to blame others and take responsibility….”

“Am I the only one who can’t help thinking that this is a blame others story and that Luke is blameless? About the only person who didn’t receive a negative comment was the guy who makes the pastries. Come on Luke, man up. It happened on your watch.”

“How can you take seriously someone who wrote a column as recently as September 2018 titled “A business beginners guide to tried and tested swindles”. It starts by “offering an aide-memoire for those looking to spot the next fraud”. What happened next – you couldn’t make it up!!!”

There is a criminal trial pending on Patisserie Valerie’s former chief executive and finance director, so Johnson said he could not talk fully. A lot of people commented that it was too soon for him to try and mend his public profile if he could be a trial witness and not talk openly.

So one issue is timing and the other issue is accepting your part in any issues and demonstrating what you have learnt and would do differently.

This self-analysis is a critical element for people applying for non-executive and trustee roles – an ability to show what you have learned from mistakes or things that did not go well, over the years.

Does Theresa May accept responsibilities for her part in failing to achieve the promised Brexit?  Again, it is probably too early for her to talk about this.  She is doing interviews and saying what she under-estimated in handling Brexit – so a part-failure admission. But certainly not yet an apology or frank analysis of what she could have done differently.

I firmly believe there is a future for anyone, no matter what they have been through.  It is sorting out what your real strengths are and then packaging them to be relevant to others.  And a lot of this will be around what you have learned.

If, like Luke Johnson, you seem to struggle with admitting to past failures, it may be good to get someone objective to help you with this!

If you look at Jonathan Aitken who was a former Cabinet minister and spent time in prison for perjury, he has taken the apology and learning to the ultimate limit.  Last year Aitken was ordained as a deacon in the Church and now works as an unpaid prison chaplain.

While there is some scepticism around his rebirth, he has found a role where his story fits and he is credible.

If I was advising Theresa May as to what next, I would look for where she is really credible and has achieved success – which is in her passion for helping women become politicians.  Martha Gill in the Guardian says, “whatever else you may think of Theresa May, she is a true champion of women”.

In 2005 she launched Women2Win and is generally seen to have made a difference in encouraging and supporting more women to become MPs. And you may not think she did a great job as prime minister, but no-one can deny that she achieved the top political job in the country?

In Luke Johnson’s case, I would expect a number of operators in the private equity market to value his contribution still. This would be all the more if he can be honest about what he should have done differently and learn from this. If he can, then there is a new career as business guru on ‘How I was duped and how to avoid another time” or whatever.

There are also some very good organisations who provide mentors to senior people in public and private life – and they see anyone who has been through the mill as potentially good experience to help others avoid or go through similar issues.

So whatever you have done in the past, no matter how successful or unceremonious the ending, you want to unpick the elements that you have real credibility in and then build your new career around these.