Case Study: Elizabeth Jackson on turning your passion into a business

Founder at Flowers from the Garden

Elizabeth Jackson, former chief executive of Directorbank, says she swapped her corporate stilettos for wellington boots and has never been happier.  The journey evolved over a few years.

Turning your passion into a business – Flowers from the Garden

Leaving the private-equity backed executive search business in 2011 happened unexpectedly.  She says, “The business never made a loss in the ten years I ran Directorbank and just before I left, I had been given a performance bonus. So although elements of leaving were hard, I focused on the fact that I had delivered profits and had treated my team very well.

“But time is a healer.  I initially avoided people and places that would bring everything flooding back but it’s not a problem now – I have moved on 100%.”

She agrees that initially the process felt like a bereavement: “I lost a big part of my life. However, my family and friends were fantastic and as luck would have it, my two daughters were at home that first year. That was a real gift to enjoy.”

She wasn’t sure initially what to do.  Her husband, David Jackson was chairman of the AIM listed Redhall Group and due to step down. With an age difference between them she was not keen to take on a new full time role; she wanted to spend time with David.

Her first key activity was to sort out their properties – they had homes in London and the Lakes. In the process, they spotted a vineyard in Hereford and came close to buying it.  “This didn’t happen,” she adds, “but it provided the germ of an idea. It got me thinking about having a property and a business linked to it.  We already had land at home and I love growing flowers. Then a dear friend offered me a few acres from her land – and Flowers from the Garden was born.” 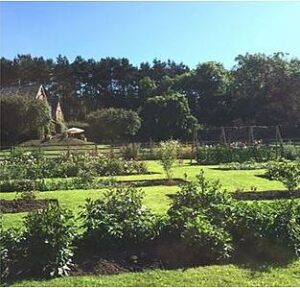 Elizabeth went on a number of RHS gardening courses and also one run by Flowers from the Farm, a not-for-profit focused on reducing the air miles of flowers grown for weddings and supplying wholesalers.

One of the courses was on floristry and at the start Elizabeth was not only growing flowers but also arranging them for a number of weddings, “I quickly realised how time-consuming the floristry side is – meetings with the bride and mother of the bride and huge pressure for everything to be perfect.  And actually, what I really love is growing.  So I am now very clear that I am a grower and last year created my first website, knowing exactly what I want to offer.”

David has stepped down from corporate life and Elizabeth loves the fact that they garden together on their four acres. David ‘willingly digs and weeds’ for her which gives her a lot of scope for growing.

They signed up to the Workaway scheme a few years ago which is about cultural exchanges and sharing experiences. Hosts offer food and accommodation in return for around five hours of help a day, five days a week.

Elizabeth and David have hosted three or four couples a year for periods of two or three weeks to help them with the garden.  So far couples have come from Chile to Germany and shortly Japan, “It’s a privilege to open our house to other cultures, we learn as much from them as they do from us – we have dinner together every night.”

Elizabeth is a non-executive director of Northern Ballet which she loves, “It satisfies a need to feel useful but I also learn a lot from them, particularly around digital skills.” She combines this with investing in the stock market and time with her family.  “It’s a very balanced life,” she adds.

She agrees that she has created a business that makes her very happy, “Yes, this is a hobby business. But it more than covers its costs – I wouldn’t want this to be a drain on our resources. It’s lovely to do something with my husband and it gives me such pleasure when brides and florists absolutely love our flowers.  Sweet peas, roses, peonies, hellebores – gorgeous flowers all year round and from Britain, with no air miles.

“I love putting a smile on people’s faces.”