Awards shine a light on women’s contribution to science, technology and engineering 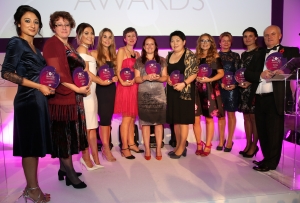 A former Royal Navy engineer, a science toy and an entrepreneur using technology to help GPs pick up early signs of cancer were among winners at tonight’s WISE Awards, which recognised the outstanding contributions of women in STEM (science, technology, engineering and mathematics) at a glittering ceremony in London with Royal Patron of WISE, Her Royal Highness The Princess Royal and 400 guests.

WISE chair and Microsoft managing director Trudy Norris-Grey said, “Our winners show how women are solving some of the world’s most critical health and social issues using science and technology. I hope they will inspire more girls to follow STEM careers because we need more like them – females are our biggest pool of untapped talent.

“But technology also means younger generations expect work to look different. For those of us in big corporates, we need to think again about how we attract and retain bright talent. We have to transform culture if we want to see women at all levels, including the boardroom. This will only happen if industry leaders are active and vocal champions – as demonstrated by our winning companies tonight.”

Asel Sartbaeva received the WISE World Award for her pioneering technology allowing vaccines to be stored and transported without refrigeration – saving lives in parts of the world without electricity. Bhavagaya Bakshi was honoured with the WISE Tech Engineering in Health Award for her app to help GPs make an early diagnosis of cancer, by searching the warning signs of 200 types of cancer at the press of a button.

The Woman of Industry Award went to Amelia Gould, Head of Engineering at BAE Systems, who leads a team of 650 responsible for the safety and security of engineering on naval combat ships. “I truly believe I am helping to make this country safer, and that inspires me”, said Amelia, who wants to launch a “Recruit one more” campaign with WISE, urging every female engineer in the country to find a woman they can encourage to pursue a career in STEM as a way of doubling the number.

Recognising that you cannot start too early in inspiring girls, the inaugural WISE Toy Award went to The Curiosity Box, a fun experiment kit that brings science and technology to life. Judges included young children and their parents who felt this toy would inspire their daughters to study STEM subjects.

More women work in science and engineering than ever before – numbers have increased by more than 61,000 in the past 12 months and 230,000 in the past five years. Trudy Norris-Grey welcomed the positive trend but expressed the need to step up the pace in encouraging more women into technology careers and technology companies. She said, “We have a real problem, but it is one we can solve. The question for business is – what more can you do to attract and retain women in technical roles? Tonight’s awards show what can be achieved by business leaders who put sustained and strategic effort into attracting and retaining women. With a big push, we could get a million women working in STEM by 2020.”

Following on from last year’s first ever ‘WISE Man of the Year’ award, Terry Sandham of GSK won the accolade this year for achieving 30% female engineering apprentices against the national average of 8%. The WISE Employer Award went to software engineering firm AVEVA which has achieved above industry numbers of women across the business – from a 50/50 gender split in this year’s graduate intake, to 22% of women on the executive team.  Building services partnership, Troup Bywaters + Anders won the WISE Apprenticeship Programme Award – they have doubled the number of female apprentices to 20%.

Anne Adams and her team from The Open University were awarded the WISE Tech Innovation prize for their work using storytelling and interactive games to improve STEM learning for women. The Institute of Physics was honoured with the WISE Talent Award for their guidance on tackling gender stereotypes in schools, which pilot schools have used to more than treble the number of girls taking AS Level physics over two years.

Amy Mercer, higher laboratory student at Pfizer, Sandwich, won the WISE One to Watch Award for a trailblazing woman under 21 who will light a fire under the next generation. She was recognised for her work as a trained STEM ambassador and her passion for inspiring young children especially at primary school age when the interest develops in STEM.

Amy has participated in career fairs for secondary schools, 6th forms and adults and achieved success in encouraging a young girl to consider applying for a Pfizer apprenticeship all because of her chat and encouragement.

Amy inspired a global high end cosmetic company to consider offering apprenticeships after hearing her talk passionately on the emphasis of women in science.

The full list of finalists and award winners is HERE.

The link to the award winner’s photos is HERE