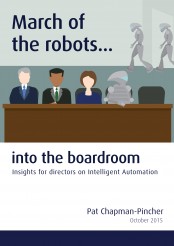 More than half of British companies risk losing jobs and profits because boards do not have the skills to manage the rise of artificial intelligence in the workplace, new research by a leading businesswoman and futurist has revealed. 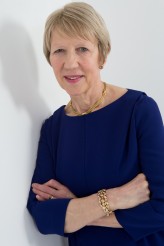 Pat Chapman-Pincher, who has built, run and chaired a number of internet and mobile phone businesses over the past 35 years, has spent the past six months investigating the UK’s leading corporates to see if they are prepared for the impact of artificial intelligence and intelligent automation in their businesses.

She warns: “We are facing a revolution bigger than the internet and yet leaders are not even aware of it. British bosses must get into technology before they see profitability, brand names and even their jobs disappearing without warning.”

Research she carried out this year shows nearly half (47 per cent) of business leaders have not looked at the impact of automation on jobs in their companies and 58 per cent of bosses admit they do not have skills on their boards to understand or manage technology. More than two thirds (68 per cent) of boards are making piecemeal investment decisions about technology rather than taking an holistic view of the business and its future.

Chapman-Pincher added:  “Most companies are now introducing what I call intelligent automation.  This is not full-blown artificial intelligence but computers using elements of it to make decisions before acting.  An example would be robots for stacking supermarket shelves.

“The robot is not just replacing stock that was there – a routine action that manufacturers would recognise.  But it is also assessing the weather (ice cream or woolly jumpers), promotional offers for that week, what seasonally sells well at that time of year and more; and then deciding what shelf space to give to what and how best to display to maximise sales.  Marketing and store managers would see these as their jobs.”

Chapman-Pincher believes poorly managed automation will significantly hit profitability in the next three to five years:  “UK businesses are automating parts of their business in isolation – without looking at how it is affecting future jobs and profitability.  Intelligent automation is already being implemented in accountancy and legal firms, retail supply chains, architect design and dozens more of white collar jobs, many of which are senior.”

She has interviewed more than 30 directors and chairmen from all sectors and spoken at events with nearly 1,000 senior directors of FTSEs and large companies to test out her thinking.

“A very typical conversation,” she adds “was with a senior partner from an international professional services firm.  They explained they were automating vast numbers of routine operations that would traditionally be done by graduates and newly qualified professionals.  When I asked how this was impacting their graduate recruitment machine – of around 1,000 graduates a year – there was silence.  They hadn’t even looked at this.  They hadn’t connected how automation will affect future jobs and recruitment or how it will change the whole structure and profitability of the firm if they have very few junior people and far more senior people.”

It is this disconnect between automation and board management that worries Chapman-Pincher:  “Few board directors are interested in technology and they don’t ask the questions or manage the issues in the way they would, say, a black hole in their finances.  They don’t have the processes or frankly, the interest, to manage how technology is bringing about wholesale changes even bigger than the internet did 15 years ago.”

She cites a recent example of Jeremy Clarkson and his BBC Top Gear programme:  “His non-compete clause said he could not work for another UK media company for another year. Presumably this clause was supposed to protect the BBC’s intellectual property.  I imagine when these contracts were drawn up, they never saw that competition would come from an online bookseller, Amazon, who have just paid the presenters £160m to create a similar show for Amazon Prime.  This is another disconnect between how technology is changing our everyday world and how this is impacting on business.  How many other UK directors’ contracts are out of date and who from HR and legal teams are looking at contracts?”

Chapman-Pincher has published a white paper, March of the Robots … into the Boardroom, and highlights what she thinks are the key areas for boardrooms and executive teams to focus on.  Top of the list is to create an advisory board with “people who are challenging, dynamic, cutting edge in technology, innovative and creative – and who would probably never fit into any traditional board.”  They should look at particular areas of the business, work with managers and directors and run one of the company’s strategy days.

She also calls for new recruitment briefs to require directors and managers to have minds open to change; bring in technology advisers and look at the roles and briefs of HR, risk management, legal teams, headhunters and more.

Pat Chapman-Pincher adds:  “There is a new role for business schools here too.  We are badly missing a new core module, call it Future Technology, to ensure every manager has core skills in technology just as they do in finance.”