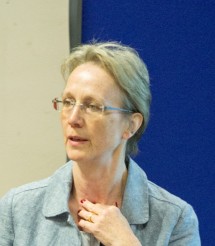 Catherine Manthorpe works at the University of Hertfordshire and after attending a one-day Training Gateway course on ‘how to develop a social media strategy’, led by Victoria Tomlinson, founder and chief executive of Northern Lights PR , has become very interested in how social media can be used by academics to extend the reach of their research and gain new audiences. In this blog she talks about the development of a six-month Social Media Academy at the University of Hertfordshire which will start in December this year.

This December at the University of Hertfordshire we’re launching our first Social Media Academy targeted at academic and research staff. The Academy is a six-month programme to introduce key social media tools and platforms and to support participants in developing a strategy for using social media to extend the reach of their work in a time-effective way. The Academy will be structured around four face-to-face sessions with practical ‘homework’ between sessions in order to develop capability in using social media. It has been developed both in response to a perceived need for this training across the university and a wish to provide support for academic staff to use the tools of the digital age in an effective way. It is an exciting development and has clearly struck a chord because the 20 available places were filled within 36 hours of the course being advertised internally by email.

The very first seeds of the idea for this venture were sown in February 2014, when I attended a one day course on ‘Developing a social media strategy’ run by Victoria Tomlinson, the BBC Expert Woman on Social Media. I went because after the last national research assessment exercise (REF2014), in which the assessment of the impact of research was a new and critical criterion, I knew that social media was ‘important’ for impact but I didn’t know how to use it and where to start. I recall that during the morning of that training day I seemed to use the word ‘overwhelmed’ or ‘overwhelming’ every other sentence. However, by the end of the day I had a good sense of what Twitter and LinkedIn were for and how these could be used, alongside a good blog, to reach out to an audience, or many audiences. And I had a plan. And the core of that plan was to understand how researchers used social media to increase the reach of their research, to understand how we could use social media to maximise the impact of research at the University of Hertfordshire, and to find out what support and training colleagues needed to do this.

In April that year, with the help of Jodi Nelson-Tabor, then Research Fellow at the Creative Economies Research Centre at the University of Hertfordshire, we devised a four-part course on ‘social media for researchers’ which was to run as a pilot over four half days in May and early July. We invited early career researchers to attend. In total 136 researchers were invited but only one person booked onto the course. The invitation was opened up to all research staff at the university – but with a poor response. So we did a survey to find out why. This is what we found. The reasons why staff did not book onto the course were (and respondents could answer more than one question, so the percentage is more than 100): 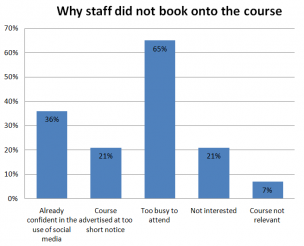 However, 70% of the respondents said that they were interested to learn more about how social media could help their research and 50% said they would be interested in attending a course on social media for researchers.

In September 2014 we ran a workshop at a researcher development conference at the university called ‘How social media works for researchers’, using the twitter hashtag #uhsmr14 to curate a range of interesting resources related to the topic and also to tweet about the day itself. The idea of the workshop was to help kick-off a bigger dialogue with academic colleagues about what kind of social media training and what on-going support and development they wanted to support their use of social media in respect of their research. We had four speakers who were all users of social media and each had a different case study on how they use social media to support their research – and one on some of the risks. Jennifer Evans (@HistorianJen) talked about how she and her colleague Ciara Meehan (@CA_Meehan) ran a successful three-day international conference titled ‘Perceptions of Pregnancy: from the medieval to the modern’ using social media and blogging to support the organisation. Jodi Nelson Taylor (@BNDmand) drew from her own PhD research to demonstrate how social media was a powerful tool for researchers. David Gibbs (@Gibbs_Law) gave three tips for researchers from his experience of producing his blog, ‘Gibbs: Law and Life’, and Chamu Kuppuswamy (@ChamuKuppuswamy) gave a presentation on some of the risks and pitfalls of social media. 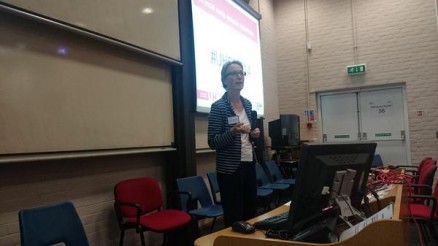 The response to that two-hour workshop was hugely positive – described by one participant as ‘useful, interesting and cutting-edge’- and opened the door to the development of the Social Media Academy. The Academy is different from many forms of social media training by offering a holding hand to help participants navigate the myriad of different forms of social media and work out how to use it effectively. It is not going to be a ‘sit and learn’ training but rather one which supports participants to ‘go out and do’. It remains to be seen if this format will work well – I’ll tell you next summer!