It is Northern Lights PR’s 20th anniversary this year. To celebrate we wanted to do something new and different that reflected our values – had heart, made a difference and shared our PR skills.

When Heather McGregor of Taylor Bennett told me about their Brunswick Internship we knew this was it.  We wanted to run the northern version to encourage graduates from BAME communities to go into communications as a career – they are under-represented in this industry as the PR Week debate has highlighted.

It’s just finished and we are bowled over with the results – we also have four, maybe five, maybe even six graduates who want to go into our industry and have pledged to encourage others.

Here’s what we did, with tips if you want to do something similar.  We are a small business – anyone could do a version of this.  We paid our interns but in the current economy you could do this without.

Brunswick work with University of East London; we worked with Bradford University School of Management – a top ten UK business school.   Because the aim is to increase the number of people working in the UK communications industry, we specified UK residents.

The universities help to promote the internship – we were quite late starting this, but it’s best to start from September and interview around April.

2. How many interns and for how long?

We originally planned to copy the Brunswick programme – six interns for 10 weeks.  Because we were late, we only had six graduate applications and one second year under-grad.  We decided to cut out the one-day selection process and offer all the graduates a place (they all impressed us) – but only for three weeks.

With hindsight, ten weeks would have been extremely hard to manage.  Three weeks stretched us to our limit and in fact was enough to enthuse them and give them excellent communications skills – see their blogs written just after a week.

3. Ask for help from employers and CIPR members

We asked a number of employers if they would support us.  Northern Rail, Hallmark and the university gave us real life challenges

–        Northern Rail has just employed four community ambassadors to encourage more people to use the trains in areas where traditionally they don’t.  They asked for a toolkit and PR launch

Each of them gave a half day workshop – mix of masterclass and presentation on their challenge.

We then asked the regional CIPR committee if they would help – and Andy Green, Justin McKeown, Nigel Keenlyside, Prof Ann Gregory, Gary Taylor and Northern Lights colleagues all did masterclasses on aspects of PR.

A number of our partners stepped in to do sessions on careers advice – Jane Hustwit and Saeeda Ahmed – and specialist areas such as Tinderbox Media on social media.

Andrew Palmer, regional director of the CBI, joined us for a social BBQ one evening so the interns could practise their networking skills!

Our office has no spare desks.  So Bradford School of Management offered a room with computers and log-in details for the interns as a base.  And they came to our offices twice a week – and worked in the dining room of the house next to our office.  They all had laptops and accessed our wireless network to do research for their campaign planning. 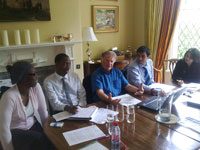 At the interviews, we spelt out to the interns that if they joined us they would have to ‘hit the ground running’.  When they saw the schedule just before they joined, it was a reality shock.

We were paying the interns, they were employees and we made it quite clear we expected a lot.

There were tensions in the group – they are all ambitious and this is to be expected.  This was the toughest part from our side.  We had to spend a lot of time listening, coaching and guiding the individuals and the team.  But this reaped the most rewards – though we did lose one intern at the end of the first week.

We did do an ‘ice-breaker’ team event on the first morning – and cooked a supper one evening to spend relaxed time with them.  With hindsight we probably need to allow for more team building.

We set the bar high and our interns responded.  They carried out research in the evenings and weekends and worked late on their presentations.

6. What our interns achieved

On their final afternoon, our interns did four presentations of half an hour each, back to back.  It would kill a lot of PR professionals – but the interns were not fazed and delivered superbly.

Northern Rail, Hallmark and the university all joined us to hear their presentations.  Alex Glen of Hallmark said they had given him ‘900 campaigns’!  Richard Allen of Northern Rail was delighted and expects to implement their campaign and the same with the university.

Their final presentation was to the Northern Lights team – what did they get out of the internship and should we do it again?

The resounding answer was yes, we should repeat it.  And all of our interns have personally committed to spread the word about communications as a career – in schools, at the university, with family and friends.

Already our interns have been offered jobs and further work and workshadowing.  They were given chances to die for – and have absolutely picked them up.  They have been a credit to our business.

Thanks to everyone who helped us – particularly to Taylor Bennett for generously giving endless advice, practical support and the structure of a programme that worked.

See what Sally Sykes, CIPR presidential candidate, said about the internship being best practice for the UK (go to 11. 43 and 12.43 minutes)