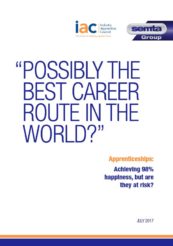 New research shows 98 per cent of engineering apprentices are happy in their jobs – citing good pay and no debt, fulfilling work, qualifications and career progression.  But this extraordinarily successful career route is at risk from government changes to the apprenticeship system and is being held back by poor careers advice at school.

The research was carried out with 1200 apprentices, through the Industry Apprentice Council – made up of apprentices from the advanced manufacturing and engineering sector and supported by national engineering skills body Semta.

Ann Watson, chief executive of the Semta Group, said: “As we finalise new standards for apprenticeships it is important that ministers listen to apprentices and prevent the collapse of an extremely successful system. We are already facing an uphill battle with poor careers advice in schools. We need to make apprenticeships more attractive not less to our young people and employers, particularly the SMEs, at a time when we need all the engineers we can get and the skills gap is growing – we need nearly two million more engineers and technical staff by 2025.”

John Coombes, IAC member and toolmaker at Ford Motor Company Ltd, said: “Governments have created what must be the world’s best career route for young people – where else would we get 98% saying they are happy with their career choice? But more than 90 per cent of apprentices oppose the removal of mandated qualifications, and there is a lot of unease about the focus on the End Point Assessment as the primary measure of an apprentice’s achievement.”

The research also highlighted a significant gender bias in careers advice, with 85 per cent of female apprentices saying their school or college had put higher education as the number one option for school leavers, compared to just 77 per cent for male apprentices.  Similarly fewer young women were given information about apprenticeships compared to young men – 35 per cent against 41 per cent.

Philippa Dressler-Pearson, IAC member and advanced technical engineering apprentice at Southco Manufacturing Ltd, Worcester, said: “There’s a massive skills shortage of engineers and technical staff in the UK but you don’t hear anything about this in schools. Teachers don’t have enough information about apprenticeships, why they are important and what they offer.”

The apprentices have made a number of recommendations for government and schools. They say no school should be awarded outstanding by OFSTED unless they deliver quality careers advice on apprenticeships and that this advice should be a statutory requirement in all schools. They also want formal qualifications included in apprenticeship standards wherever employers recommend them.

The Industry Apprentice Council, set up by Semta, is the UK’s industry voice for apprentices and recognised by government – members are regularly invited to address MPs, peers and leaders in education and industry.